Filter by Date Filter by Type 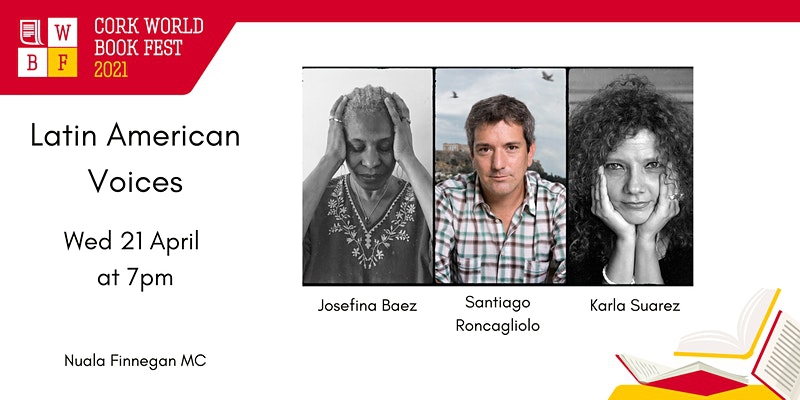 The Cork World Book Fest is delighted to present, in association with the Department of Spanish, Portuguese, and Latin American Studies, UCC, an evening with Santiago Roncagliolo, Josefina Báez, and Karla Suárez who are among the most exciting voices in the contemporary literary field.

Santiago Roncagliolo is an acclaimed novelist, journalist, translator, and screenwriter from Peru, based in Barcelona, having grown up in Mexico where his family were political exiles. His novel, Abril Rojo (Red April) is a tense political thriller set against the backdrop of bloody Holy Week celebrations in the provincial Peruvian city of Ayacucho and explores profound questions about death and the limits of life itself.Photo credit: Dimitris Yeros

Josefina Báez describes herself as a performer-writer-educator-director who grew up in the Dominican Republic and who moved to New York at the age of twelve. She is best known for her tour-de-force performances of Dominicans, a reflection on the experience of living life bilingually and biculturally. Photo credit: Giovanni Savino

Karla Suárez is a Cuban writer, who has lived in Lisbon for the last decade. Both an engineer and a classically trained guitarist, her work includes short stories, novels, and travelogues. Her award-winning novel, Silencios (Silences), offers a revealing glimpse of the world of post-revolutionary Cuba through the eyes of its young protagonist who seeks respite and refuge in a silent world.

Nuala Finnegan is a Professor in the Department of Spanish, Portuguese, and Latin American Studies at University College Cork, Ireland, and the Director of the Centre for Mexican Studies. She has published widely in the areas of contemporary Mexican literary and visual cultural studies with a particular focus on gender. Interested in multi-disciplinary collaboration and community engagement in her research, many of her projects have involved exhibition curation and co-ordination including Entre Mundos/Between Worlds: Images from Life between Mexico and Ireland in 2019 with Cecilia Gámez Campanella and Silvio Severino at Cork City Library, and OUTPOSTS: Global borders and national boundaries at the Glucksman Gallery, UCC, in 2017-2018 with Fiona Kearney and Chris Clarke. Recent publications include the bilingual collection of essays Ireland and Cuba: Entangled Histories/Irlanda y Cuba: Historia entretejidas (Boloña, 2020) with Margaret Brehony, Cultural Representations of Feminicidio on the U.S.-Mexico Border (Routledge 2018), and Rethinking Juan Rulfo’s Creative World: Prose, Photography, Film (Legenda 2016), with Dylan Brennan.