The Amazon, the rainforest, the jungle, the green hell (el infierno verde): all attempt to name this huge, vibrant swathe of Peru. Whether you explore it up close, from the ground or a boat, or fly over it in a plane, the Peruvian jungle seems endless. Well over half of the country is covered by dense tropical rainforest, and this jungle region, sharing the western edge of the Amazon with Colombia, Ecuador and Brazil, forms part of what is probably the most biodiverse region on Earth. Jaguars, anteaters and tapirs still roam the forests, huge anacondas lurk in the swamps, toothy caimans sunbathe along riverbanks, and trees rise like giants from the forest floor. Many indigenous tribes still live scattered throughout the Peruvian section of the Amazon, surviving primarily by hunting and fishing.

The jungle of southeastern Peru is plentifully supplied with lodges, guides, boats and flights. Cusco is arguably the best departure point for trips into the southern selva, with air and road access to the frontier town of Puerto Maldonado – a great base for visiting the nearby forests of Madre de Dios, which boast the Reserva Nacional Tambopata and the Parque Nacional Bahuaja-Sonene, an enormous tract of virgin rainforest close to the Bolivian border. Many naturalists believe that this region is the most biodiverse on Earth, and thus the best place to head for wildlife. Reachable overland from Cusco, the Manu Biosphere Reserve and National Park runs from cloud forest on the slopes of the Andes down to relative lowland forest. For a quicker and cheaper taste of the jungle, you can travel by bus from Cusco via Ollantaytambo to Quillabamba, on the Río Urubamba, which flows north along the foot of the Andes, through the dangerous but unforgettable whitewater rapids of the Pongo de Mainique. 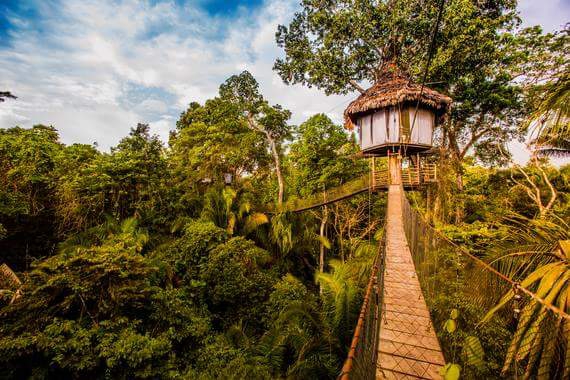 North of here lies Pucallpa, a rapidly growing, industrialized jungle town in the central selva, best reached by scheduled flights or the largely paved road from Lima. Another sector of this stunning central jungle region – Chanchamayo – is only eight to twelve hours by road from Lima, and is blessed with crystalline rivers, numerous protected areas for birdwatching, and good road links. Winding fast but precariously down from the Andean heights of Tarma, the Carretera Central is now paved all the way to Satipo, a jungle frontier town, relatively close to the Río Ene. En route, the road passes through the cloud forest via La Merced, from where there are buses to quasi-European Oxapampa and the fascinating Tyrolean settlement of Pozuzo.

The main access point to the northern selva is the city of Iquitos, at the heart of the largest chunk of lowland jungle with no road connections to the outside world, just riverboat and plane. The northern selva can also be reached from the northern Peruvian coast via an increasingly popular but still adventurous route that takes the Río Huallaga from Yurimaguas, a three- to four-day boat journey that can be broken by a visit to the immense Reserva Nacional Pacaya Samiria at the heart of the upper Amazon, a little-visited wildlife haven. The northern selva is also the most organized and established of the Peruvian Amazon’s tourist destinations, with many reputable companies offering a range of jungle visits, from luxury lodges and cruises to no-frills survival expeditions. 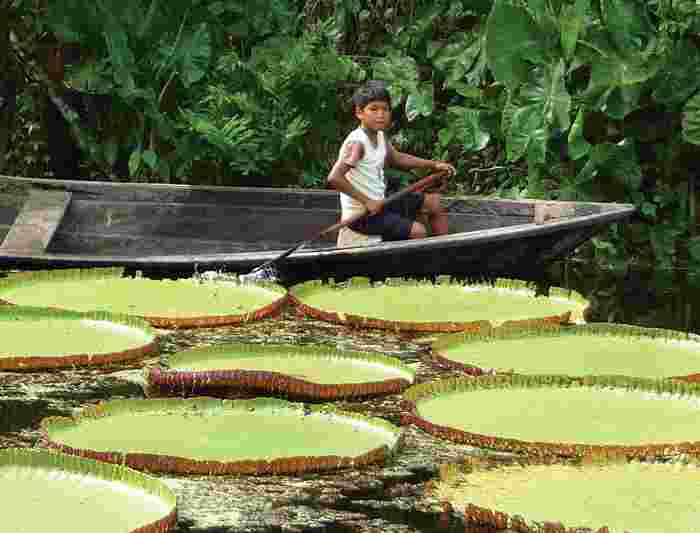 Brief history
Many archeologists believe that the initial spark for the evolution of Peru’s high cultures came from the jungle. Evidence from Chavín, Chachapoyas and Tantamayo cultures seems to back up such a theory – ancient Andean people certainly had continuous contact with the jungle areas – and the Incas were unable to dominate the tribes, their main contact being peaceful trade in treasured items such as feathers, gold, medicinal plants and the sacred coca leaf. At the time of the Spanish Conquest, long-term settlements existed along all the major jungle rivers, with people living in large groups to farm the rich alluvial soils.

Early colonization
For centuries, the Peruvian jungle resisted major colonization. Alonso de Alvarado successfully led the first Spanish expedition, cutting a trail through from Chachapoyas to Moyobamba in 1537, but most incursions ended in utter disaster, defeated by disease, the ferocity of the tribes, the danger of the rivers, climate and wild animals. Ultimately, apart from white-man’s epidemics (which spread much faster than the men themselves), the early conquistadors had relatively little impact on the populations of the Peruvian Amazon. Only Orellana, one of the first Spaniards to lead exploratory expeditions into the Peruvian Amazon, managed to glimpse the reality of the rainforest, though even he seemed to misunderstand it when he was attacked by a tribe of blonde women, one of whom managed to hit him in the eye with a blow-gun dart. These “women” are now thought to be the men of the Yagua tribe (from near Iquitos), who wear straw-coloured, grass-like skirts and headdresses.

The impact of the Church
By the early eighteenth century the Catholic Church had made deep but vulnerable inroads into the rainforest regions. Resistance to this culminated in 1742 with an indigenous uprising in the central selva led by an enigmatic character from the Andes calling himself Juan Santos Atahualpa. Missions were destroyed, missionaries and colonists killed, and Spanish military expeditions defeated. The result was that the central rainforest remained under the control of the indigenous population for nearly a century more.

The rubber boom
As “white-man’s” technology advanced, so too did the possibilities of conquering Amazonia. The 1830s saw the beginning of a century of massive and painful exploitation of the forest and its population by rubber barons. Many of these wealthy men were European, eager to gain control of the raw material desperately needed following the discovery of the vulcanization process. Moreover, during this era the jungle regions of Peru were better connected to Brazil, Bolivia, the Atlantic, and ultimately Europe, than they were to Lima or the Pacific coast. The peak of the boom, from the 1880s to just before World War I, had a prolonged effect. Treating the natives as little more than slaves, men like the notorious Fitzcarrald made overnight fortunes. 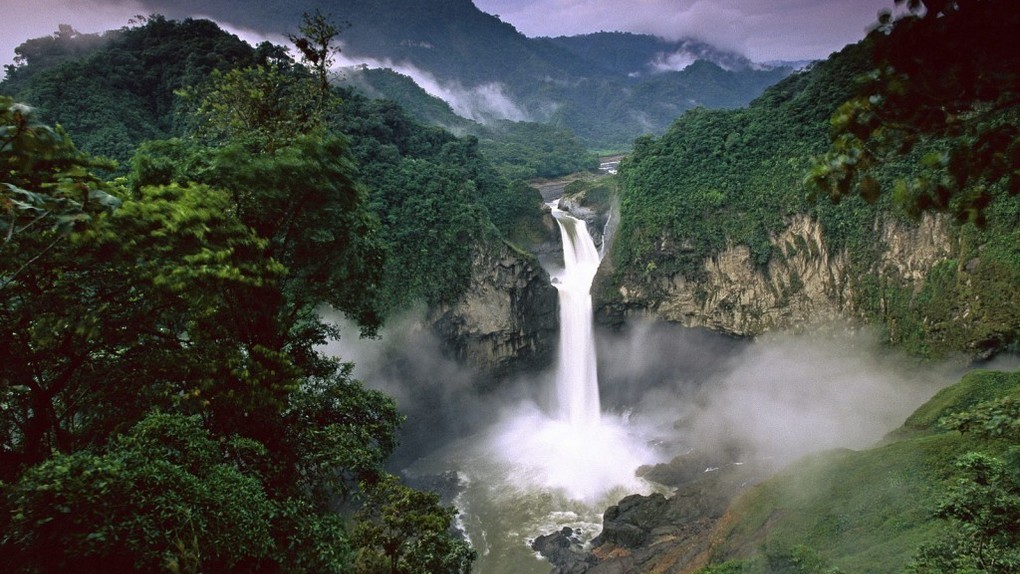 Modern colonization
Nineteenth-century colonialism also saw the progression of the extractive frontier along the navigable rivers, which involved short-term economic exploitation based on the extraction of other natural materials, such as timber and animal skins; coupled to this was the advance of the agricultural frontier down from the Andes. Both kinds of expansion assumed that Amazonia was a limitless source of natural resources and an empty wilderness – misapprehensions that still exist today.

Coca barons
When the Peruvian economy began to suffer in the mid-1980s, foreign credit ended, and those with substantial private capital fled, mainly to the US. The government, then led by the young Alan García, was forced to abandon the jungle region, and both its colonist and indigenous inhabitants were left to survive by themselves. This effectively opened the doors for the coca barons, who had already established themselves during the 1970s in the Huallaga Valley, and who moved into the gap left by government aid in the other valleys of the ceja de selva (edge of the jungle) – notably the Pichis-Palcazu and the Apurimac-Ene. Over the subsequent decade, illicit coca production was responsible for some ten percent of the deforestation that occurred in the Peruvian Amazon during the entire twentieth century; furthermore, trade of this lucrative crop led to significant corruption and supported the rise of terrorism.

The twenty-first century
Clearing the forest for agriculture continues, and in Madre de Dios gold mining ravages the jungle. By the turn of the century, a massive desert had appeared around Huaypetue, previously a small-time, frontier mining town. The neighbouring communities of Amarakaeri (who have been panning for gold in a small-scale, sustainable fashion for some thirty years) are in danger of losing their land and natural resources. Attempts by NGOs and pro-Indian lawyers to maintain the boundaries of reserves and communities are constantly thwarted by colonists, who are supported by local government.

All of our providers offer 24/7 support